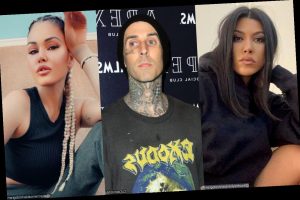 After Shanna Moakler takes a dig at her several times on social media, the Poosh founder seemingly accuses her boyfriend’s ex-wife of stalking the drummer.

AceShowbiz –Kourtney Kardashian apparently had some words to say to Travis Barker‘s ex-wife. Upon learning that Shanna Moakler took a dig at her several times on social media after dating the Blink-182 drummer, the “Keeping Up with the Kardashians” star seemingly hit back at her.

Kourtney threw apparent shade at Shanna through her Poosh Instagram Story on Monday, February 22. Alongside a woman’s picture, she wrote, “Stop (social media) stalking your ex.” She also put a link to a blog post titled, “How to Break the Habit of Stalking Your Ex on Social Media.”

Kourtney Kardashian appeared to hit back at Shanna Moakler for shading her online.

“Modern life has cursed us. We are haunted by the radical accessibility of everyone we’ve ever met, hooked up with, or dated via a tiny device we happen to keep on our person during all our waking moments,” so read the blog post. “It’s no wonder we’ve made a daily-or several times daily, or every hour-habit of checking in our exes, and our exes’ exes, their new lovers, friends, acquaintances, and so forth. It’s not healthy, it’s not helping us move on, and unfortunately, it’s all too easy.”

A few hours after the 41-year-old reality star shared the post, Shanna put out a quote on her own Instagram Story that read, “Stop complaining about your life. There are people out there dating your ex.” The former Miss New York USA then added crying-laughing and wink face emojis on the top of the snap.

This was not the first time Shanna took a swipe at Kourtney and Travis’ relationship. A few days prior, she was caught liking a shady comment about the new couple’s confirmed romance. It read, “Shhhhiiiii that broad don’t got nothin’ on you. Travis downgraded big time.”

Despite the dissing remark, Shanna claimed that she was “happy” for her ex-husband and his new girlfriend. “He’s my friend and co-parent, and I want him to be happy,” the 45-year-old told Page Six on February 18. “And if being with her makes him happy, and she’s happy, I’m happy for both of them, honestly… He can handle that Kardashian drama.”

At that time, the actress/model also opened up about her own relationship with boyfriend Matthew Rondeau. When picking him up at Los Angeles International Airport, she said that they were “doing great.” She additionally gushed, “I’m excited to have him back.”

Shanna and Travis got married in 2004. They parted ways in 2006 and were officially divorced in 2008. Together, they share two children, 17-year-old son Landon and 15-year-old daughter Alabama. When they were still together, the exes were unveiled to have been close with Kourtney.