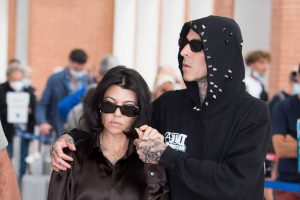 Ahem, wondering how Kourtney Kardashian is feeling about her ex Scott Disick sliding into the DMs of her other ex Younes Bendjima to complain about her PDA with Travis Barker? Not! Great! While Kourtney hasn’t commented publicly on this drama (aside from a slightly pointed Bible verse), a source tells E! News that she isn’t thrilled that Scott spoke to Younes.

Apparently Kourtney knows Scott “still has issues accepting her love with Travis,” but she “just wishes he would know better than to reach out to Younes of all people. Younes can never be trusted and Scott knows that.”

The source adds that Kourtney “doesn’t care” what Scott thinks of her relationship with Travis or “how she lives her life,” and that “She’s not going to change what she’s doing and is going to keep enjoying her trip.” She also feels like Scott clearly “had a moment of weakness and did something impulsive that he will now regret” and hopes he’ll “learn” from the backlash. When it comes to Younes, the source says “Kourtney is cordial with Younes but that’s it. She doesn’t trust him or his intentions.”

In conclusion: “Kourtney is madly in love with Travis and that’s really all that matters to her. Everyone needs to get over it.”

As a reminder in case you’re part of the 1% of society that somehow missed this yesterday, Scott slid into Younes’ DMs with a photo of Kourt and Travis making out and wrote “Yo is this chick OK!???? Broooo, like what is this? In the middle of Italy.” Younes then exposed him, musing “Couldn’t miss this one. He been playing around for too long, tired to stay quiet and be the nice guy.” 😳