Kourtney Kardashian Wears Her Pajamas to Malibu Dinner With Friends 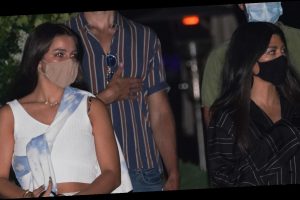 Kourtney Kardashian wears pajamas and heels while leaving a dinner at Nobu on Wednesday evening (July 15) in Malibu, Calif.

The 41-year-old reality star was joined by her friend Simon Huck and his fiance Phil Riportella, as well as TikTok star Addison Rae.

PHOTOS: Check out the latest pics of Kourtney Kardashian

The day before, Kourtney was seen out with her sister Kendall Jenner, where they were filming for their show Keeping Up With The Kardashians.

In case you missed it, Kourtney recently slammed reports that she doesn’t want to work, and opened up about why she stepped back from filming the long-running show.

Earlier in the week, Just Jared Jr premiered the trailer for Addison‘s upcoming animated film Spy Cat, where she voices the lead role of Marnie. Check out the trailer now!