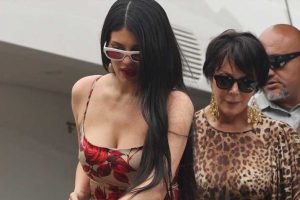 As we all know, Kylie Jenner is a billionaire and when it comes to disposable income the limit simply doesn’t exist Except, according to Kris Jenner, it definitely does, lol. A Page Six source says that—amid backlash to Kylie’s private plane use—Kris has some concerns about her daughter’s fast-paced spending.

But another source denied ^ all ^ that ^, saying “Kylie has actually always been very good [with her money] — young but adult at heart. “

So, what does Kylie spend her money on, exactly? Get ready to weep.

Per Page Six, Kylie drops $300,000 a month on clothing (help), $5 million a year to maintain her plane (which itself cost $72 million), $300,000 to $400,000 a month on security, and a ton on real estate. All told she has $80 million tied up in properties around California, including her $12 million Hidden Hills estate, a $15 million Hidden Hills lot that she wants to build a new home atop, another $3.25 million Palm Springs lot that she’s also planning to build a place on, a $36.5 million “mega mansion” in Bel-Air, and another $13.45 million mansion in Bel-Air that she owns with Travis Scott.

That’s a lot of money to spend on multiple homes (who has time to live in so many different places?!), but to be fair, real estate is usually considered a pretty good investment. Anyway, pretty sure Kylie can afford all this and more without sweating it, so Kris probably doesn’t need to stress.