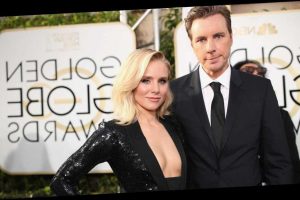 Kristen Bell is opening up about her husband Dax Shepard about a month following his announcement that he had relapsed after 16 years of sobriety.

"He is actually doing really great … Everybody is up against their own demons," Bell told Ellen DeGeneres in a clip from her show posted by People.

"The thing I love most about Dax is … that he was able to tell me and tell us and say, 'We need a different plan.' We have a plan: If he has to take medication for any reason, I have to administer it. But he was like, ‘We need a stronger plan.'’' Bell remembered Shepard saying to her, "'I was faltering, I have to do some sort of emotional work to figure out why I wanted to use again.'"

Shepard's relapse came after he needed to take painkillers following an ATV accident.

Bell went on to say that they would be going to therapy and coming up with a better plan if he needs to take painkillers again.

"I will continue to stand by him because he's very, very worth it," she said.