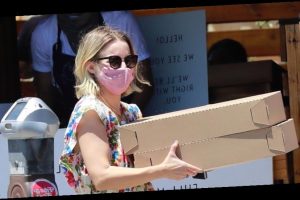 Kristen Bell carries a few boxes to her trunk while out in Los Angeles on Saturday (July 4).

The 39-year-old actress wore a pretty floral dress during her errand, as well as a mask and fanny pack, as she picked up some food orders to celebrate the Fourth of July at home with her family.

PHOTOS: Check out the latest pics of Kristen Bell

Just recently, Kristen opened up about how they’re getting their youngest child, Delta, out of diapers, after Kristen was mom-shamed over it.

“The Twitterverse was kind of mom-shaming me, which I’m not interested in,” she told Today’s Parent in a recent interview. “I kept responding with the same thing: ‘Every child is different,’ which they are. And yes, I have a five-and-a-half-year-old who still sometimes wets the bed and that’s OK! But she’s getting there.”

Kristen added, “We wake her up at about 11 p.m. when she’s like a zombie and put her on the toilet…I think it’s really normal and no one should feel ashamed if their kid has an irregular pattern for potty training. And if you want to try this 11 o’clock make-them-pee trick, great, there’s no shame in any of it.”

Last month, after Kristen admitted that Delta was still in diapers, many other moms left rude comments on her social media pages.