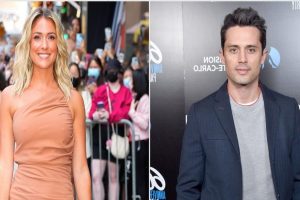 What happens in Cabo . . . continues over a decade later? Kristin Cavallari and Stephen Colletti’s new “Laguna Beach” rewatch podcast, “Back to the Beach,” has arrived, and the former on-and-off couple apparently have recently revisited the past in more ways than one.

In “Back to the Beach,” Colletti and Cavallari are rewatching every episode of “Laguna Beach,” which aired from 2004 to 2006 on MTV and was followed up by spinoff “The Hills.” At the time of the reality TV series, Colletti and Cavallari were teenagers in a love triangle with their fellow high school classmate, Lauren Conrad. In fact, Conrad and Cavallari’s feud — mostly propelled by both of their links to Colletti — was much of the plot focus during the series.

After reviewing the first episode, Cavallari reflected on the situation with Conrad in the initial podcast installment and separate intro, all while taking “full responsibility for some of the dumb, nasty catty-girl stuff that I said.” Said Cavallari, “Watching it now, it’s so different when you’re in the middle of it and you’re very emotional. I will say the fact that Lauren Conrad and I really went after each other is so messed up when — [to Colletti] I love you — but the person we should have been going after is you. . . . But it’s like, ‘Why are we not blaming the guy?'” Much of the drama, Colletti and Cavallari explained, was orchestrated or pushed by the show’s producers.