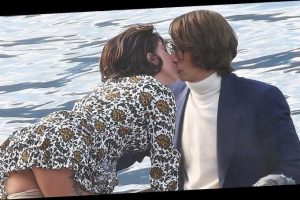 Lady Gaga is hard at work right now filming the upcoming movie House of Gucci and we have more photos from set to share with you!

The 34-year-old Oscar-winning entertainer was spotted sharing a kiss with co-star Adam Driver while filming a scene in a boat on Thursday (March 18) in Lake Como, Italy.

The movie is based on the novel The House of Gucci: A Sensational Story of Murder, Madness, Glamour, and Greed by Sara Gay Forden, and focuses on the assassination’s of Maurizio Gucci (Driver) by his ex-wife Patrizia Reggiani (Gaga), who was tried and convicted of orchestrating his assassination on the steps of his office in 1995.

Joining Gaga and Adam on set that day was the film’s director Ridley Scott, who is a four-time Oscar-nominated filmmaker.

Make sure to check out all of the photos from set, which include shots of Adam lifting Gaga out of the boat and pics of them riding a moped.