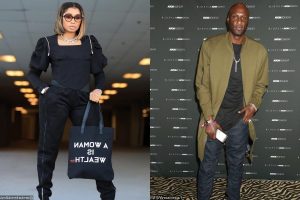 During his appearance on ‘The Wendy Williams Show’, host Wendy Williams grills the 41-year-old athlete about the alleged ‘fake relationship’ between him and the ‘Love and Hip Hop: Atlanta’ star.

AceShowbiz –Lamar Odom has set the record straight about his love life. Amid rumors that he’s dating Karlie Redd, the former NBA star shared in the Friday, May 21 episode of “The Wendy Williams Show” that he and the TV star are “just friends.”

To that, Lamar responded, “We’re friends. We’re really good friends, getting to know each other.” Wendy, however, didn’t buy his words easily and asked if they “sleep together” which prompted an awkward silence. He once again insisted that he and Karlie are “friends.”

Lamar also denied that Karlie had a key to his home. “No, nope. Not at all,” Lamar shared. “I’m still single Wendy. Happily single. I’m in Atlanta.”

Lamar and Karlie sparked dating rumors after they were captured on camera cozying up to each other at a nightclub. In a video that circulated online, the 41-year-old hunk put his arm around Karlie’s shoulders as they swayed their bodies right and left.

In another video which appeared to taken on the same night, Lamar and Karlie witnessed another pair’s special moment as a cast member of the VH1 show appeared to surprise his significant other with a luxurious car as a gift. The two seemed to be happy for the other couple as they were smiling when the surprise was unveiled.