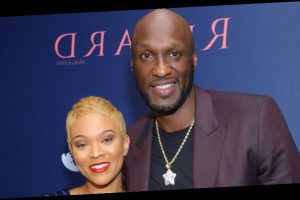 Lamar Odom and Sabrina Parr have decided to split and end their engagement.

The 33-year-old personal trainer revealed the sad news on their social media pages and cited Lamar‘s health as a big reason for their break up.

“Y’all know I’m honest and transparent so I have to be the first to let you guys know that I am no longer engaged to Lamar,” Sabrina wrote on her Instagram Story about their split. “This has been a difficult decision for me to make but it is the best for myself and my children.”

She continued, “Lamar has some things that he alone has to work through. I love him dearly but I am no longer able to be by his side while he seeks the help he so desperately needs.”

Lamar has struggled in the past with addiction, however, the issues he is dealing with now were not made clear.

Sabrina added, “I wish him all the best. and asking that you pray for everyone involved.”

Earlier this year, Sabrina was seen supporting Lamar at a wellness center stay during the summer.

Sabrina and Lamar became engaged late last year after making their first appearance as a couple in August 2019.

END_OF_DOCUMENT_TOKEN_TO_BE_REPLACED

END_OF_DOCUMENT_TOKEN_TO_BE_REPLACED
We and our partners use cookies on this site to improve our service, perform analytics, personalize advertising, measure advertising performance, and remember website preferences.Ok