Larsa Pippen Joins OnlyFans: ‘I Don’t Care What Anyone Says’ 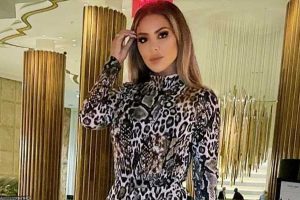 AceShowbiz –Larsa Pippen is welcoming fans to her newly-created OnlyFans page. The ex-wife of famed basketball player Scottie Pippen took to her Instagram account to announce her new venture on the adult site amid her drama surrounding her past romance with Malik Beasley.

Alongside a promotional video of her page on OnlyFans featuring her donning skimpy outfits, Larsa wrote in the caption of her Monday, May 24 post, “I don’t care what anyone says. Every woman can love and live on her own terms.” She went on to say, “Welcome to my OnlyFans, a really fun way to get to know the real me and for me to interact one on one with my true fans!”

Detailing what fans will get by subscribing to her page, the former “The Real Housewives of Miami” star shared, “It’s got behind the scenes of my wild life, me showing off my personal favorite swimsuits and lingerie, and live chats and personal DM’s where we get to talk. I want to show women all over the world no matter where they are in life they can be sexy and successful! Subscribe to my page.”

Larsa’s new venture arrived after she clapped back at Malik’s estranged wife Montana Yao after the latter called her out in an Instagram Story post. Offering her two cents on the Minnesota Timberwolves player, Larsa wrote, “When I thought about him and how he treated your child he’s not the type Of man I want around mine. Any man who would deny his child and then leave the mother penniless is not a real man.”

The former reality star went on to claim that the 24-year-old athlete “cried entirely too much” and is “cheap, but then again you never saw any alimony so you already know that.” She continued, “Malik was a clout chaser who pursued me relentlessly before I even knew you existed. And I have the DM’s but then again, he knows that.”

She also denied Montana’s accusation that her behavior embarrassed her children. “All my beautiful children that you referenced will never have to read how their father didn’t claim them,” she claimed. “You should be worried about the narrative you two need to create to distract yours from dealing with that reality.”