Larsa Pippen Mocked for Hanging Out With Yung Miami and Taina Williams: ‘You’re Too Old’ 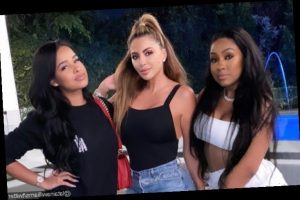 The daughter of Fabolous takes to her Twitter account to share a photo of her alongside the City Girls member and the 46-year-old star, making a lot of people baffled.

AceShowbiz -This is surely a group that you’ll never expect to be hanging out together. Taina Williams has successfully made a lot of people baffled after she shared on Twitter on Monday, July 20 a snap of her alongside Yung Miami and Larsa Pippen.

In the said photo, the daughter of Fabolous opted for a completely casual look as she covered herself in an all-black clothing that included a T-shirt and tights. She completed it off with a pair of white sneakers and a red handbag. Meanwhile, the 46-year-old looked sporty in a black tank top and short denims as the City Girls member showed some skin in a matching white crop-top and hot pants.

Considering the fact that Miami and Taina are still in their 20s, people find it weird that Larsa is hanging out with them. Not a few decided to mock the ex-wife of Scottie Pippen. “Instead of choosing a retirement homes, Larsa be partying with children,” one sarcastically commented, as one other said, “Larsa is such a groupie. She’s too old it’s embarrassing go spend some time with your kids!”

Someone pointed, “Lara still trying to hang with the hottest in the game. Girl you’re too old for this crew.” Another individual reacted to the photo, “Why is grandma larsa in the pic she old af hanging out with 20 yr olds.” There was also a person who commented, “Not to be an agist or anything but what the hell is she doing hanging out with women 25 years younger than her?”

Many people also assumed that the reason why Larsa chose to hang out with young girls is because she had been cut off by the Kardashians. This speculation has been going around on the Internet ever since April, when fans noticed that there’s no trace of the famous family on Larsa’s Instagram page. However, neither Larsa nor the Kardashians has given their comment on it.