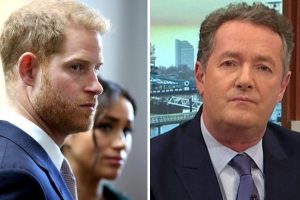 Piers Morgan on whether Prince Andrew should be forgiven

Piers Morgan, 57, has taken to Twitter to react to the news that Prince Harry and Meghan Markle’s popularity is at an “all-time low”. The former Good Morning Britain host, 57, responded to a tweet which said that Harry and Meghan’s popularity had seriously declined, saying that he “wasn’t surprised”.

In view of his 7.9 million followers, Piers commented on the news.

He exclaimed that it was the “least surprising news” of the millennium.

It comes just before the Queen’s Platinum Jubilee celebrations later this week.

Piers wrote in response: “Least surprising news of the Millennium..”

The reporter’s fans and followers rushed to the comments to chime in.

Twitter user @Nadinekellman hit back at the star: “How’s your popularity?”

Speaking about Piers’ new programme, Uncensored, @Andymercer asked: “You not having them on your new show?”

@Ricekripeace said: “The fact you’re commenting about it is even less surprising.”

Piers’ comments come after he took aim at Harry and Meghan in a new rant.

The former GMB presenter said two days ago that the couple would hijack the Queen’s jubilee celebrations.

He referred to the pair as “selfish wastrels”.

The outspoken TV host said on his TalkTV show, Piers Morgan Uncensored last week: “The Duke and Duchess of Sussex, the southern English county that I come from, incidentally, where they’ve spent precisely three hours, are a pair of undignified, whiney, hypocritical virtue-signalling, selfish wastrels.

He added he was most worried about how the former royal pair would make the event “all about themselves”.

Piers furthered: “And I’m already shuddering at how this fame-hungry duo will hijack the headlines from the woman [The Queen].

“They should be given them purely to cement their rival royal brand.” (sic)

It comes after Piers Morgan returned to TV with the specified intention of “cancelling cancel culture”.

The first episode of his new show Uncensored featured an explosive interview with former US president, Donald Trump.

However, the momentum seems to have died as the second episode lost nearly 200,000 viewers.