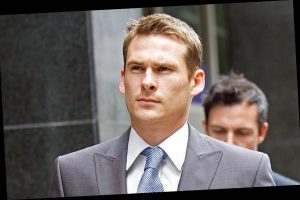 The ‘All Rise’ singer is reportedly expecting his third child as girlfriend Verity Paris, known as Ariana Grande impersonator, is pregnant with his baby.

AceShowbiz –Blue singer Lee Ryan is reportedly set to become a dad for the third time.

The “All Rise” singer’s girlfriend of one year, Ariana Grande impersonator Verity Paris, is believed to be pregnant with the couple’s first child together, with the pair said to be thrilled by the news.

A source told The Sun newspaper’s Bizarre column, “They couldn’t be happier. Pals have joked it will mean Lee will have some time to chat to someone who understands him. It’s early days but they’re excited.”

Lee, 37, welcomed son, Rayn, with former fiancee Samantha Miller in 2008 and he has daughter Bluebell with his ex-girlfriend Jessica Keevil. The star was also engaged to Atomic Kitten singer Liz McClarnon in 2003, but they later split due to the pressures of fame.

Speaking previously, Lee said, “I shouldn’t have lost the family life I had with my ex-fiancee, Sammi, and our little boy, Rayn.”

“He’s ten now and we’re really close again. But I neglected the relationship so it’s only relatively recently that he’s been able to see functioning co-parenting, something my mum and dad never achieved.”

“I don’t have any regrets about the mistakes I’ve made because they’ve shown me that something good can come out of something bad.”

Back in 2019 when Lee took part in reality TV show “Celebs Go Dating“, he invited Samantha to give him dating advice. “It was great for me because she knows me so well, she’s like my best friend now,” he explained.

And she told him, “You can be so high energy that the other person can’t talk, so just calm down a little bit, maybe.”

“I love your enthusiasm, it’s one of the best things about you, but just be present on the date because I could imagine, maybe, that you’re not,” she added. “Your mind is working a million miles an hour but I think it would amazingly help you if you were present and slightly calmer.”