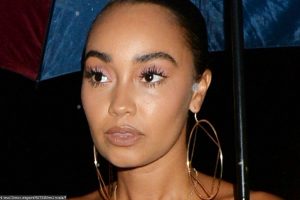 The singer, who was part of BRIT Award-winning group Little Mix from 2011 until they went on hiatus in 2022, first signed up to the microblogging platform in April 2021.

AceShowbiz –Leigh-Anne Pinnock has posted her first tweet more than a year after joining Twitter. Although she signed up to social media platform Twitter in April 2021 under the handle of @LeighAnneMusic, the 30-year-old pop star only posted for the first time on Tuesday, July 19.

The singer, who was part of BRIT Award-winning group Little Mix from 2011 until they went on hiatus in 2022, tweeted, “Is this thing on? [side eyes emoji]” She has so far amassed 45.5k followers on the microblogging platform, but is yet to follow anyone herself.

In February, it was announced that Leigh-Anne, who first found fame as part of Little Mix alongside Perrie Edwards, Jade Thirlwall, and previously Jesy Nelson when they competed on and eventually won “The X Factor“, had signed her first solo record deal with major label Warner Records and will be represented by Tap Music.

Former bandmate Jesy, who quit Little Mix back in December 2020, became the first of the girls to go solo and teamed up with rap star Nicki Minaj to release song “Boyz” in October 2021. Leigh-Anne, however, admitted that when it comes to her own solo career, she is “not rushing anything.”

The “Confetti” hitmaker, who welcomed twins with fiance Andre Gray in August 2021, said, “I’m 100 per cent not rushing anything! It has to be perfect, very excited though!”

However, in early July, Leigh-Anne re-shared a snap of herself and “Secrets” singer RAYE in the studio on her Instagram Story and gushed, “@raye you are a FORCEEEE. Your talent is so fricken inspiring. (sic)” RAYE’s original post was captioned, “and today was beautiful “@leighannepinnock I’m so proud of this woman. (sic)”

The teaser of the pair working together came after Leigh-Anne was the victim of a leak after her debut solo single, “I Need You”, circulated online. Warner Music swiftly had links to the recording taken down.