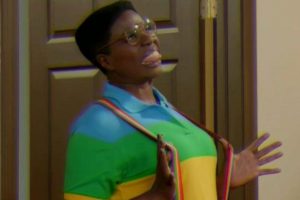 Leslie Jones made sure to kick things off right at this year’s MTV Movie & TV Awards. The comedian opened the show with a pitch-perfect WandaVision parody that brought together some surprising cameos.

The show opened with Kat Dennings and Randall Park reprising their characters Darcy Lewis and Agent Jimmy Woo, while Jones played herself, but as a reality bending superhero who can control the fabric of reality and recreates scenes from famous sitcoms.

The sketch opened with Jones in the black-and-white ’50s sitcom universe of WandaVision‘s first two episodes, before diverging and moving into sitcom genres WandaVision never touched on, including Good Times and Family Matters — in which Jones even donned Steve Urkel’s iconic rainbow polo and suspenders.

After the fantastic pre-taped into sketch, Jones took the stage for a stand-up monologue to kick off the ceremony, and poked fun at the TV shows and movies that are nominated, as well as her own dating life.

“I loved all the romantic shows, like Bridgerton and Too Hot to Handle,” Jones shared. “And I love Dating Around, because that’s how I used to date. I would ask all five of my dates to meet me at my favorite taco stand and if it didn’t turn out at least I get to go home with some carnitas. So it didn’t turn out to be a bad night.”

She also joked about how she’s been using dating apps, but they haven’t been going well, and the men she’s met on them have been less than stellar.

“Somebody had the nerve, the audacity, one guy had the audacity, to try to ghost me. I’m gonna call you on all seven of my phones. All seven of them! You can block my number, but I know yours, though. You cannot ghost a ghostbuster!”

Ahead of Sunday’s big show, the 53-year-old comedian shot a promo for her hosting debut and promised some big comedy and memorable moments.

Going into Sunday’s show, WandaVision, Emily in Paris, and RuPaul’s Drag Race led this year’s nominations for TV, while Judas and the Black Messiah and Borat Subsequent Moviefilm: Delivery of Prodigious Bribe to American Regime for Make Benefit Once Glorious Nation of Kazakhstan lead the film nominations.

Additionally, Scarlett Johansson is set to receive the Generation Award, while Sacha Baron Cohen will be honored with the Comedic Genius Award. As we patiently wait to see which other stars will take home golden popcorn trophies, the complete list of MTV Movie & TV Awards winners can be found here.