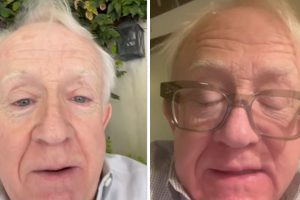 Leslie Jordan revealed he bought his first ever home in a candid video uploaded on social media a few weeks ago. The Will and Grace star died on Monday morning at the age of 67 while on his way to work in a car accident.

It occurred as he suffered a “medical issue” behind the wheel of his BMW which caused him to crash into a building.

In August, the actor shared an Instagram video to announce his ecstasy at having bought a new home.

“It’s never too late to be happy, y’all. I really did it. I bought my first piece of …………. property,” he captioned the post, addressed to his 5.9 million followers.

The clip shows the American Horror Story actor spinning around the empty apartment as he showed off his balcony view.

“Well, guess where I am. I’m way up in the sky in a new condo that I just bought.

“67 years old and I have my first condo,” Leslie said before singing the theme tune to The Jeffersons sitcom.

Leslie’s heartbroken fans took to the comments section to pay tribute to the star, with Mattboomer writing: “Leslie -you were and are a national treasure.

“You were a truly authentic talent, a pioneer, and a bright light always. Heaven just got a lot more interesting. Thank you.”

Angie Harmon penned: “I just can’t thank you enough for all of the joy & laughter & LOVE you have to all of us.

“To the world. You were always the kindest person in the room no matter where you were!!

“I know you are dancing & singing & smiling & laughing with us still. I will miss everything about you. Love you bunches.”

Dylan.mcdermott commented: “He was the funniest, loveliest guy on the planet and a true friend.”

Ericstonestreet said: “You Leslie. You were the purest form of funny there ever was. RIP, sir.”

Tank.sinatra wrote: “Devastating news. This man was light and joy in human form. Heaven just got a little brighter.”

Leslie’s representatives confirmed his tragic death in a statement to The Mirror.

The spokesperson said: “The world is definitely a much darker place today without the love and light of Leslie Jordan.

“Not only was he a mega talent and joy to work with, but he provided an emotional sanctuary to the nation at one of its most difficult times.

“What he lacked in height he made up for in generosity and greatness as a son, brother, artist, comedian, partner and human being.”