‘LHH’ Star Moniece Slaughter Is Pregnant, Says Lil’ Fizz Is Not the Father 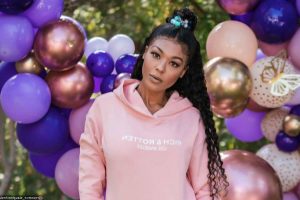 The ‘Love and Hip Hop: Hollywood’ star reveals in Instagram Live that she is expecting a daughter, who is due two days before her dad’s birthday, but she refuses to talk further about the baby daddy.

AceShowbiz –Moniece Slaughter is having a bun in the oven. The reality TV star, who is already a mother of one, is currently pregnant with a child, whose father’s identity she chose to keep a secret now.

The “Love & Hip Hop: Hollywood” star shared the good news when she went on Instagram Live on Thursday, January 6. “So, we have a belly,” she said while lifting up her sweatshirt to reveal her growing baby bump. “I’m having a baby,” Moniece exclaimed in the video, before revealing that she is expecting a baby daughter, whom she’s going to name Dior, “We’re having a girl.”

During the live session, the singer/songwriter said that she let the cat out of the bag because she’s “tired of living in secrecy.” While she refused to name her baby’s father, she stressed that Lil’ Fizz is not the father.

“No, my daughter’s father is not Fizz. I am due two days before her dad’s birthday,” she told her followers. “I choose not to talk about her dad,” Moniece further explained. “It is what it is. Kam is excited,” she added of her son and firstborn Kamron’s reaction.

The stepdaughter of Grammy Award-winning gospel singer Dave Thomas of Take 6 later called out her baby daddy, whom she described as an ex-boyfriend, accusing him of lying to her about her relationship with another woman whom he called a “godsister.” Moniece said he ended up getting engaged to the so-called godsister/cousin.

Regardless the fact that she’s likely going to be a single mother once again, Moniece couldn’t hide her excitement to have a daughter. “I can’t believe I have a daughter, a mini-me,” she gushed. “This has been my greatest fear and my greatest blessing… I am assuming my daughter is going to be what bridges the gap between generational curses… I’m going to be the mom to her that I never had.”

“Dior is the life that was conceived in the wake of two traumatic losses and I just felt like it was meant to be,” she added. “I know I said I didn’t want any more kids. Dior was unexpected and I have to choose to love her in spite of. All I can do is make it to full term.”

Moniece shares her 11-year-old son Kamron with Lil’ Fizz. Her pregnancy journey is captured on camera for her new reality show, which will premiere in March.