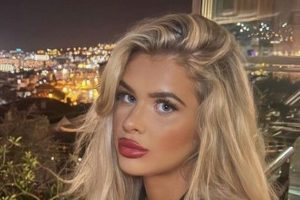 Liberty Poole has been left "shaken" after a man followed her during a trip to the supermarket.

The former Love Island star, who recently shared that her grandfather is cancer free after a year long battle, took to Instagram to share her terrifying experience with her 1.4 million followers.

The TV star then encouraged fans to listen to their gut instinct if it's telling them that something is wrong, adding that she felt something was off with the man due to the way he looked at her.

After getting to her car, Liberty filmed a quick video, which she uploaded to Instagram where she detailed what had happened.

Liberty explained that after collecting a parcel she headed to pick up some shopping, and it was here that the man began following her.

She said: "He basically looked me up and down and was like on his phone and then he was following me and looking at me round the aisles."

Liberty then made the shop workers aware of the situation, adding that after this the man left the shop but then waited in his car for her to leave.

"I had shopping bags and a parcel in my hands," she continued. "So I wouldn't have been able to defend myself and he said 'excuse me'."

Responding to the man, Liberty says that while she doesn't usually swear, she loudly shouted "no, f*ck off", which seemed to scare him and he drove off.

Discussing her experience, Liberty asked men to not follow women and girls who are on their own, adding that "they do not want the attention."

She also encouraged people to trust their gut instinct if they think something is off with a person or situation, and to stay safe.

After she returned home, Liberty shared a somewhat tearful video clip thanking her fans for their kind messages.

She said: "I just to say thank you for all your really nice messages, I'm just a bit shook up because I just feel like I've escape something really bad, like my gut instinct was screaming at me like 'Lib, Lib something's wrong'

"And then for him to have actually followed me all the way back to my car, it wasn't like next to the shop or anything, it was a walk and it was down this street.

"It's just so scary to think about what could have happened, but luckily I'm safe."