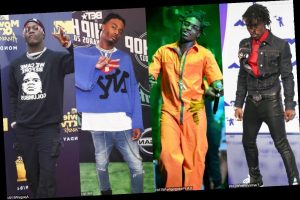 In other news, the ‘Eternal Atake’ musician details why he decides to have a $24 million diamond surgically planted on his forehead that earns him backlash over alleged cultural appropriation.

AceShowbiz –Lil Uzi Vert is setting the record straight about the nature of his relationships with fellow rappers. Fans speculated that the “XO TOUR Llif3” spitter is beefing with Kodak Black, who appeared to shoot his shot at Uzi’s rumored ex-girlfriend JT. However, in a now-deleted Twitter post, Uzi claimed that it was never the case.

“We know you don’t fw Kodak,” a fan wrote to Uzi alongside two laughing and crying emojis. Catching wind of it, Uzi replied to the fan, “I do ….who told you that.” Another fan also asked if he’s chill with Justin Bieber, to which Uzi simply responded, “Yes.”

Additionally, the rapper confirmed that there’s no bad blood between him and Playboi Carti and Lil Yachty during the impromptu QnA session. When asked about Rich the Kid, Uzi also assured fans that he’s not beefing with the “New Freezer” spitter.

In other news, Uzi detailed why he decided to have a $24 million diamond surgically planted on his forehead. Speaking with fellow hip-hop star Fat Joe in an IGTV interview on Tuesday, February 16, Uzi shared, “I’m Lil Uzi. I’m turnt up. So $24million on a ring is the stupidest idea because I’m gonna look down and that ring ain’t gon’ be there … I know me. I wake up in odd places and different sceneries.”

The rapper further claimed that the diamond, which he previously said was “almost 11 carats,” was the most expensive purchase he’s ever made. Uzi also divulged that he’s been paying off the diamond since 2017 before recently finalizing the last payment.

Despite the shocking price, many Internet users were not impressed by the rapper’s fashion choice. He was even accused of cultural appropriation. “Where r all the people saying cultural appropriation? I guess it doesn’t matter when it’s Asian cultures,” one critic said. Denying the accusations, Uzi responded, “Hey glad to see you sharing your thoughts and knowledge. But I’m not mimicking anything I know about a lot and love different forms of art…do you even know where the images is from? Honestly…I love y’all.”