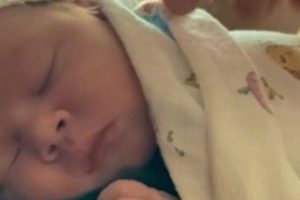 The Duke of Sussex, Prince Harry has compared youngest child Lilibet to the late Princess of Wales, his mum Diana Spencer.

Following the release of the last three episodes of Netflix's Harry & Meghan earlier today, fans are busy gushing over the royal family's never-before-seen baby photos from the hospital.

In one scene, the 38 year old said: "I think at the moment I see a lot of my wife [Meghan Markle] in Archie and a lot of my mum in Lilibet. She's very Spencer-like."

Harry then goes on to pinpoint the little bundle's "same blue eyes" as Diana, who tragically passed away in 1997, aged 36, while Meghan herself, 41, interjected with: "Blue, blue, blue eyes" and "sort of like a golden, red-ish hair."

Casting her mind back to Lilibet's arrival in the summer of 2021, the Duchess went on to share: "There was something that felt so complete, once we had Lilibet.

"Everyone just really respected that we'd been through so much and, we, like any parent, deserved to just welcome their child into the world peacefully and have that time as a family to nurture and cocoon. Which we did, with the addition of our little toddler."

Elsewhere in these latest Harry & Meghan instalments, the couple's Zimbabwean nanny Lorren sat down for her first-ever interview, where she recounted originally being offered the job of a lifetime.

"I had this phone call and they were like, Prince Harry and Meghan would like to see you and speak to you about looking after Archie. I was like, 'Hang on a minute, I need to sit down,'" she began.

"When I arrived at Frogmore Cottage, I see this guy, he's tall, he's ginger, and he's walking barefoot. And I have gone and bought a new pair of shoes in Clarks.

"And suddenly, whatever I thought or felt, the formality just sort of slid and I felt so at ease. They were really hands-on parents."

After baby Archie would wake and Meghan had fed him, Lorren took over for the rest of the day.

"Normally we'd go for a morning walk," she said, before Harry chimed in with a fantastic anecdote.

"She said, 'Is it okay if I, like, tie him on my back with a mud cloth like we do in Zimbabwe?' Yes! Let's do that! Archie's legs like this. Hugging Lorren like this, fast asleep," he smiled.