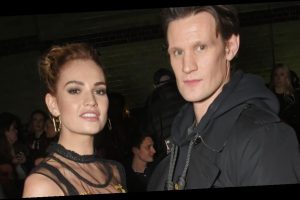 Lily James is reportedly looking to win her ex-boyfriend Matt Smith back after the Dominic West scandal left her feeling "vulnerable".

The Affair actor Dominic, 50, was seen on a trip to Rome, Italy with Lily, 31, where they were spotted enjoying a cosy scooter ride in the Italian capital city.

A source has now claimed Lily is feeling "insecure" after receiving negative comments as a result of the photos and wants to go back to her 38 year old ex Matt.

An insider told Heat magazine: "Lily's feeling insecure and vulnerable, given all the negative comments about her, and she could use a friend.

"Matt's a good guy – Lily sees that now more than ever, and is really hoping he believes in second chances the way she does."

The source claimed that Lily, who reportedly split from Matt "for good" after they couldn't "get past their differences" in October, knows "she made a bad decision letting him go."

OK! online has reached out to Lily's representatives for further comment.

After the photos emerged, Dominic and his wife Catherine Fitzgerald insisted their marriage was “strong” as they posed for photos and locked lips outside their home in Wiltshire.