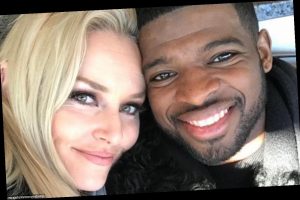 When announcing the end of their three-year relationship, the Olympic gold medalist and her hockey pro fiance share kind words about each other before asking for privacy.

AceShowbiz –Lindsey Vonn and P.K. Subban are no longer engaged. After three years of dating, the Olympic gold medalist and her hockey pro fiance announced that they have called off their engagement as they shared amicable posts on social media.

The retired skier broke the shocking news via Instagram on Tuesday, December 29. Posting a photo of herself with her now-ex-fiance, she first raved, “Over the past 3 years PK and I have had some incredible times together. He is a kind, good man, and someone I respect a great deal.”

“However, after much consideration we have decided to move forward separately,” the 36-year-old continued dishing. “We will always remain friends and love each other immensely. We ask that you please respect our privacy during this time.”

Also sharing kind words was Subban. Turning to his own Instagram page to let out the identical photo, he penned, “Lindsey is one of the most kind and caring people I know. I will always treasure our time as a couple together and the many laughs we shared.” He then added the similar statement as his former fiancee.

Subban proposed to Vonn in August 2019 at their Los Angeles home with an emerald ring from XIV Karats. “I got the ring and said, ‘You know what, I’m just going to do it at home,’ ” he told Vogue at that time. “Everything kind of came together on that day. Everyone says the stars aligned – well, it was actually a full moon. I was worried because I knew she would want to be dressed up and not in her pajamas, and it just so happened she had a business meeting, so she was fully dressed up.”

Four months later, Vonn doubled down the engagement by proposing to Subban. Alongside an Instagram snap of them, she declared, “Merry Christmas and happy holidays everyone!! On our 2 year anniversary I returned the favor and asked PK to marry me… and he said yes. We talk about equality but actions speak louder than words. Men should get engagement rings too and this is what PK deserves. Can’t wait to marry you babe.”

Before she became an item with Subban, Vonn famously dated golfer Tiger Woods. She was also married to fellow Olympian Thomas Vonn from 2007 to 2013.