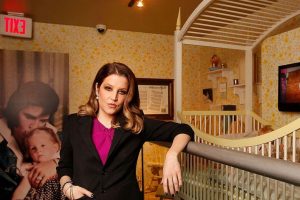 The well-known Graceland, which was the home of Elvis Presley, will be inherited by his granddaughters following the death of his only daughter Lisa Marie Presley last week, according to reports.

It has since then been confirmed by her reps to OK! that she will be buried in the iconic Graceland home, where both her father Elvis Presley and son Benjamin are buried.

It has now also been reported that the Graceland estate will be inherited by Lisa Marie's three daughters.

According to People Magazine, ownership of the iconic home will go to Riley Keough, 33, and twins Finley and Harper, 14.

This has been confirmed to OK! by the family's reps.

Lisa Marie's dad, also known as the King of Rock, left the home to her in his will after he passed away in 1977 at the age of 42, when Lisa Marie was just nine. She later became the sole owner of the property when the trust that held her inheritance dissolved on her 25th birthday in 1993.

On January 22 at 9am, a public service for Lisa Marie will be held at the estate, a statement on the Graceland website confirmed.

The statement read: "Riley, Harper, Finley, and Priscilla Presley are grateful for the support, well-wishes, and outpouring of love honouring their beloved Lisa Marie."

"A public memorial service for Lisa Marie Presley has been arranged for Sunday, January 22 at 9:00 am on the front lawn at Graceland Mansion in Memphis, Tennessee."

Members of the public are invited to attend the event but are being encouraged to donate to The Elvis Presley Charitable Foundation in lieu of flowers.

Lisa Marie's death came just day after actor Austin Butler won a Golden Globe award for his portrayal of her father in the film Elvis.

Austin attended the ceremony alongside his Elvis co-stars, director Baz Luhrmann and Lisa Marie herself.

In his acceptance speech, Austin thanked the Presley family "for opening your hearts, your memories, your home to me."

"Lisa Marie, Priscilla," he continued. "I love you forever."

Austin has since then shared a statement with People Magazine to say his "heart is completely shattered" for her children and mother after "the tragic and unexpected loss of Lisa Marie."

He said: "I am eternally grateful for the time I was lucky enough to be near her bright light and will forever cherish the quiet moments we shared.

"Her warmth, her love and her authenticity will always be remembered."