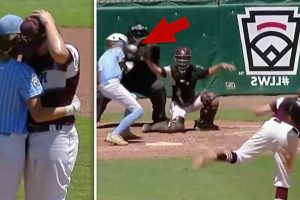 Touching moment in a Little League World Series regional tournament on Tuesday — a batter comforted an opposing pitcher after the kid accidentally drilled him in the head with a fastball.

The scene all went down in the first inning of the Texas East vs. Oklahoma matchup in Waco, Texas … when Isaiah Jarvis was at the plate squaring off with Kaiden Shelton.

On the third pitch of the at-bat, a fastball got away from Shelton, and plunked Jarvis right in the side of his forehead.

Jarvis immediately crumpled to the ground in pain — but he was able to shake it off after his helmet absorbed most of the blow.

Shelton, though, was so rattled by the wild pitch, he broke down on the mound. Video from the stadium shows he was in tears, and needed a few moments to collect himself.

That’s when Jarvis walked over from first base to tell him he was fine. Field microphones also picked up the Little Leaguer adding, “Hey, you’re doing just great.”

Shelton ended up leaving the pitcher’s mound to go play in the infield — but Jarvis’ gesture was clearly appreciated by everyone watching, including the game’s announcers.

As for how the contest ended up — it’s currently still pushing forward, with Shelton’s Texas East team leading 9-4 in the fourth inning.