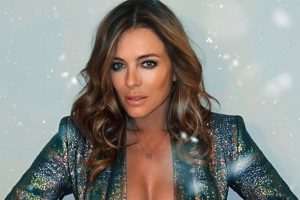 Elizabeth Hurley, 57, shot to worldwide stardom after accompanying former boyfriend Hugh Grant to the 1994 premiere of Four Weddings and a Funeral wearing the iconic Versace safety pin dress. Nevertheless, before this, Liz had climbed the showbiz ladder by taking on small parts in TV and film.

She eventually landed her first title role in the BBC series, Christabel, when she was just 21.

However, the audition for the series took an unexpected turn when Liz came face-to-face with an actress she was secretly feuding with.

In a new interview, the mother-of-one explained that she arrived at the screen test and was met with three other girls who were much more famous than she was at the time.

She continued on the Just for Variety podcast: “I was sitting in the BBC lobby waiting to meet the director and the girl before me was somebody I detested. I really detested her.

“I think I put myself in a mindset, I was on such a charm offensive which is why I got a screen test when I really was low down the ranks then.

“Because I was so riled up by seeing this girl that I thought, ‘Over my dead body is she going to get this part and not me!’”

Liz then speculated that she may not have gotten the part if the actress wasn’t there to “rile” her up.

Host Marc Malkin probed as to whether Liz had seen the woman since, to which she coyly replied: “I have” before admitting: “We are still not friends.”

The Bedazzled star continued: “She dated a boyfriend of mine. It’s a very pathetic story… but no, she didn’t go on to do very well.

“She was more successful than me at the time which is why I think it was also so painful. But no, I overtook her, it was fine.”

It comes after Liz opened up about the loss of her ex- fiancé, Shane Warne, following his death in March.

Liz and Shane were engaged from 2011 until 2013. She had previously been married to businessman Arun Nayar, had a 13-year relationship with Hugh Grant, and shared a child – Damian, 20 – with film producer Steve Bing.

Speaking to The Times earlier this month, Liz said: “Of the four great loves of my life two are dead – I always say to the other two, you’d better watch your backs.

“But yes, it was very hard and it still is very hard. Losing Shane was terrible. It’s taken a long time to sink in.

“I honestly kept thinking he’d call and it would turn out to be some big Aussie joke.”

Liz then explained that the death of Steve was “something else completely”.

She continued: “We’d been estranged for so long but made up towards the end, and a bright and different future looked as if it was opening up.

She also added that Damian “did not know” his father and instead sees Liz’s ex-husband Arun as his “father figure”.