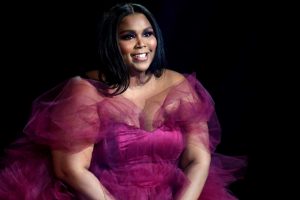 Despite recently releasing “Rumors,” a total bop of a single, Lizzo is unfortunately getting hit with tons of hate online—not because of the song, but because of her physical appearance. FYI: The way Lizzo’s body looks and the way she chooses to present herself is really none of our business, but she felt the need to address the negative comments during an Instagram Live last night.

“On days when I should be the happiest, I just feel so down,” Lizzo said through tears. “People saying shit about me that just doesn’t even make sense. It’s fat-phobic, and it’s racist and it’s hurtful. If you don’t like my music, cool. If you don’t like ‘Rumors’ the song, cool. But a lot of people don’t like me because of the way I look. “

“For the most part it doesn’t hurt my feelings,” Lizzo added. “I don’t care. I just think when I’m working this hard, my tolerance gets lower….I’m putting so much loving energy into the world… sometimes I feel the world don’t love me back.”

Lizzo recently opened up about being body shamed in an interview with Zane Lowe shortly after the song’s release. “I feel like fat is the worst thing people can say about me at this point,” she said. “This is the biggest insecurity. It’s like, ‘How dare a popstar be fat?’ I had to own that.”

“I feel like other people who were put on that pedestal, or who become pop stars, probably have other insecurities or have other flaws, but they can hide it behind a veneer of being sexy and being marketable,” she said, adding, “I don’t have the luxury of hiding behind something.”

Following the hateful comments, Cardi B came to her defense on Twitter. “When you stand up for yourself they claim your problematic & sensitive. When you don’t they tear you apart until you crying like this. Whether you skinny, big, plastic, they going to always try to put their insecurities on you. Remember these are nerds looking at the popular table,” she wrote. Cardi also condemned Lizzo’s haters for using racist jokes to make fun of her appearannce.

When you stand up for yourself they claim your problematic & sensitive.When you don’t they tear you apart until you crying like this. Whether you skinny,big,plastic, they going to always try to put their insecurities on you.Remember these are nerds looking at the popular table. https://t.co/jE5eJw8XP6

Rumors is doing great. Stop trying to say the song is flopping to dismiss a woman emotions on bullying or acting like they need sympathy. The song is top 10 on all platforms. Body shaming and callin her mammy is mean & racist as fuck. pic.twitter.com/Dr2t06mjEs

But don’t worry, this isn’t going to put Lizzo down for long. Exhibit A:

Sometimes I get sad… and then I— pic.twitter.com/o42WXVTtG1

We’re with you, Lizzo!