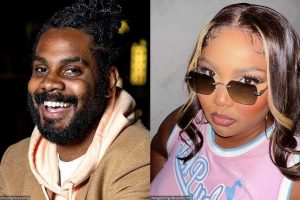 During her appearance on Andy Cohen’s radio show, the Grammy Award-winning artist gushes about her ‘supportive’ boyfriend, with whom she was spotted at Craig’s in February.

AceShowbiz -The identity of Lizzo‘s mystery boyfriend may have been revealed. Months after sparking the dating speculation and fueling it on Instagram, it’s now reported that she’s in a romantic relationship with actor Myke Wright.

It’s The Shade Room which first identified Lizzo’s new beau. According to his IMDb page, Myke has had several TV credits, including an appearance as himself on Comedy Central’s “Adam Devine’s House Party” in 2016.

Lizzo was spotted with a mystery man back in February of this year. The two stepped out for a dinner date at Craig’s in Los Angeles on Valentine’s Day. At the time, the “Juice” raptress and the man, who wore a black mask to cover his face, were seen holding hands outside the restaurant in West Hollywood.

On the same night, Lizzo posted on Instagram a note about how she redefined love. “When you think of love, what’s the first thing that comes to mind? Is it romance? Flowers & candy?” she wrote.

“I’ve come a long way in redefining love,” she went on sharing. “I think of compassion for others, talking on the phone w friends and laughing all night, looking in the mirror & dancing for myself. Love is a precious element, like gold. unbreakable and unconditional. Redefine what being in love feels and looks like. Help a stranger, call a friend, hype yourself up. I’m praying you attract the love you deserve.”

In the following month, Lizzo flaunted her togetherness with her beau on social media, while keeping his face hidden from camera. Earlier this month, she finally confirmed that she’s in a relationship during an appearance on Andy Cohen‘s radio show “Radio Andy”.

“You were photographed in L.A. in February at Craig’s with a mystery man. Are you guys still together?” Andy asked the raptress. She responded, “Yeah, whatever. Yeah.” The TV personality further inquired, “You’re Lizzo, a huge superstar, and this person is whoever that person is. Is that hard … in a relationship?”

The “Truth Hurts” hitmaker went on gushing about her “supportive” boyfriend, “If you have the right person, no. Not at all. It’s not even a factor. Because it should be mutually supportive no matter what that person does.”