Lori Loughlin’s Faith Is Helping Her Get Through Prison Sentence 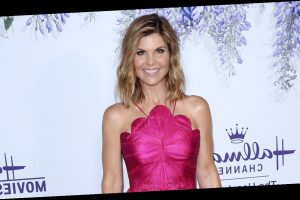 A time of penitence. Lori Loughlin has turned to a higher power for guidance amid her prison sentence for her role in the college admissions scandal.

College Admissions Scandal: Everything We Know

“She prays day and night. Her faith has gotten her through it,” a source exclusively tells Us Weekly, noting that the actress, 56, “spends her free time reading books” in her cell.

Loughlin is expected to be released from the Federal Correctional Institution in Dublin, California, by the end of this month. Her husband, Mossimo Giannulli, who is behind bars at a prison in Lompoc, California, for his involvement in the nationwide scam, is set to be released in April 2021.

“She can’t wait to be home with her girls,” the source tells Us, referencing the couple’s daughters, 22-year-old Bella and 21-year-old Olivia Jade.

Biggest Names in the College Scandal: Where Are They Now?

Loughlin and Giannulli, 57, pleaded guilty in May to paying $500,000 to get their daughters into the University of Southern California as crew recruits. They had previously denied any wrongdoing since their March 2019 arrests before ultimately accepting a plea deal.

The Full House alum began her two-month sentence on October 30 at the same all-female penitentiary that fellow actress Felicity Huffman spent 11 days in for her role in the bribery scandal. Loughlin has also been ordered to serve two years of supervised release and 100 hours of community service.

The fashion designer, for his part, reported to prison on November 19. In addition to his five-month sentence, he must also serve two years of supervised release as well as 250 hours of community service. Earlier this month, Giannulli’s 30-year-old son, Gianni, whom he shares with ex-wife Chris Giannulli, claimed via Instagram that the Mossimo founder “has been locked in solitary confinement.”

The judge on the case also ordered the When Calls the Heart alum and her husband, who married in November 1997, to pay $150,000 and $250,000 fines, respectively, as part of their plea deal. Us confirmed in November that they had submitted the money “in full.”

After her parents went to prison, Olivia Jade sat down for her first interview about the scandal, saying on Jada Pinkett Smith’s Facebook Watch series, Red Table Talk, that their family’s behavior “really can’t be excused.” The YouTuber also defended Loughlin and Mossimo during the December 8 episode, arguing that the pair simply want “whatever is best” for her and Bella.

END_OF_DOCUMENT_TOKEN_TO_BE_REPLACED

END_OF_DOCUMENT_TOKEN_TO_BE_REPLACED
We and our partners use cookies on this site to improve our service, perform analytics, personalize advertising, measure advertising performance, and remember website preferences.Ok