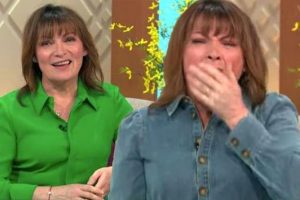 ITV daytime host Lorraine Kelly, 61, has described the anxiety she feels before “difficult interviews”, which is sometimes so bad it can prevent her from getting a good night’s sleep. The star went on to describe the methods she has learnt over the years to get around the problem.

In a recent interview, Lorraine spoke of struggling to get to sleep ahead of a major interview the next day.

The journalist has come face to face with many famous stars over the years, interviewing icons like Harrison Ford, Tom Hanks and Oprah Winfrey on her ITV show.

But in spite of being a dab hand at interviews by now, the celeb has admitted that sometimes she gets so nervous that she’s unable to relax in the evenings.

Lorraine also explained that she usually has to be in bed by 9pm sharp, because her morning talk show starts preparing for the episode ahead at 4:45am.

“I sometimes take a while to fall asleep, especially if I have a difficult interview the next day,” the star admitted in an interview with Closer magazine.

She then proceeded to share the tactics she uses to get to sleep more efficiently, which include banning technology from the bedroom.

“I now keep my phone and iPad just outside the bedroom,” she said.

Providing advice for others struggling to nod off she added: “Avoid caffeine in the late afternoon too – I don’t have it beyond midday and I read to relax.”

Lorraine previously revealed in an interview with The Mirror how the menopause had begun to affect her in her late forties, ranging from “sleepless nights” to “crippling anxiety”.

When her husband Steve told her she needed help, she went to the doctor and was officially diagnosed with menopause.

Speaking about how the diagnosis made her feel, she said: “I wasn’t prepared for it. No one talked about it. My mum, now 80, never spoke about it. It was hidden and shameful.”

She also opened up about how HRT (hormone replacement therapy) helped to relieve some of her symptoms.

Lorraine, who called the HRT she is on “brilliant”, has since found a way to look on the bright side, revealing she began to feel like her old self again within two weeks of starting treatment.

“I tried to see it positively – it’s natural to enter another stage of life.

“There’s a freedom in that,” she reflected.

Lorraine has been married to her husband Steve for nearly 30 years and the couple plan to go somewhere adventurous like Mongolia or Greenland for their 30th anniversary.

The presenter and Steve, who works as a TV cameraman, wed in 1992, and they have one daughter together.

They welcomed Rosie, who is now 27, two years after they got married.

Rosie has recently moved back from Singapore and currently works for Hello! Magazine.

Following in her mother’s footsteps, Rosie completed her own journalism degree at Edinburgh Napier University.