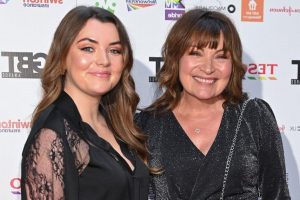 Lorraine Kelly has spoken out on the heartbreaking conversation she had no choice but to have with her daughter Rosie about safety.

The 62 year old, who recently got back on a horse for the first time in 10 years after a riding accident, and her husband Steve share daughter Rosie, 27, together, who spent several years in Singapore before moving back to the UK at the start of the Covid-19 pandemic.

Following her return, ITV presenter Lorraine explained that she was forced to have a serious talk on the importance of safety in public spaces.

“I had to have the conversation with her that I found quite heartbreaking actually, which was, this is not Singapore, you cannot walk home on your own," Lorraine said on the Be Honest podcast.

She went on: "You know, you can't leave your drink in the bar. You can't do all these things.

"And of course, she's in London, but equally if she was in Glasgow, Aberdeen, Birmingham, Manchester, Newcastle and Belfast, I would have had the same conversation.

"And that's terribly sad, you know, talking to her, telling young women that that's how it is.

"And that's really, and it's only when you're in that position that you know, and we've obviously had the high profile, dreadful tragedies of young women getting murdered, getting attacked, and all of this and it's just really, really sad.”

Lorraine, who recently hit out at Prime Minister Boris Johnson for not knowing who she is, and Rosie share an incredibly close bond, which she gave an insight into after their reunion in 2020.

At the time, she said: “I’m trying not to be too teary, because I don’t want to embarrass her, but being able to hold her after all that time was just fantastic."

Lorraine, who appeared on Gogglebox with her daughter, said of her close bond with Rosie in an interview with Weekend Magazine later: "We talk about everything under the sun. I'm her mum, though, I'd never say I was her best friend because she's got her friends already.

"I'd love to think she tells me everything but she doesn't."

It comes after Lorraine recently opened up on her last hospital visit with friend and colleague Deborah James, who sadly announced she's been moved to at-home hospice care with bowel cancer this week.

Speaking to Dr Hilary, she said: "The only thing is Hilary, is she always bounced back, you know, and I just expected her to."

She continued: "I went to see her in the hospital and although she was very thin, she was Deborah.

"She was full of life, she was funny, she was making everybody laugh," the TV host recalled with a grin. "She was her usual self. I thought this is just another wee hiccup along the line."

For all your updates on Lorraine and her family, sign up to our daily OK! newsletter.