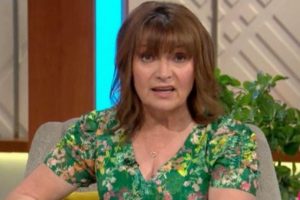 Lorraine Kelly showed her support for Peter Andre after he reflected on Rebekah Vardy's comments about his manhood.

The 49 year old dad-of-four, who had a romantic tryst with Rebekah in 2004, was painfully reminded of an interview in which she dubbed his manhood a "miniature chipolata" when it was brought up by a lawyer in the Wagatha Christie libel trial.

And television presenter Lorraine took to her ITV talk show on Friday morning to admit she felt "sorry" for the Mysterious Girl hitmaker.

After playing a clip of the singer speaking out earlier this week, Lorraine said: "Peter Andre there… as he's talking about all those comments made about Rebekah Vardy about his manhood during this ridiculous Wagatha Christie trial."

Lorraine continued: "You know what, I feel really sorry for Peter and – let's be honest – we've all sniggered, haven't we? We've all read it and gone 'hee hee', and we shouldn't, and it's not fair.

"The whole thing should have never gone to court in the first place! It's just ridiculous!"

In his video, Peter reflected on the resurfacing of Rebekah's comments on his manhood and said he had had to deal with the aftermath of it for 15 years in his Instagram post.

He said in an Instagram video: "Hi everyone, seeing as I haven't had much of a say in this and have just let everyone have a laugh and whatever… I'm just going to put it out there," the reality TV star said from home.

"15 years this has been going on. I kept quiet, and I didn't say anything, I let everyone have their laugh and let everyone say what they wanted to say.

"Yes, she's gone to court and admitted that the story was made up, and she did that because her ex-husband forced her to do it.

"But, put that all aside right and just think how it feels, like if a man or if I had said this about her anatomy or about a woman's anatomy and made up something…

"You can use your imagination – saying something very unflattering… There would be outrage," the star fumed, going on to say that the comment has been the "butt of all jokes" for over a decade. "I've been laughing about it for a while, but think how it would feel if it was the other way around. That's all I'm saying. We all know now it was a made-up story, but it's a little more serious than that," Peter added.