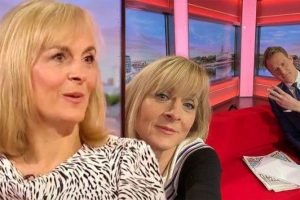 BBC Breakfast presenter Louise Minchin, 52, has opened up about leaving the popular morning programme in less than two weeks time, after 20 years at the helm. In a candid social media post this morning, the newsreader told how she was “scared but excited” after making the decision to step down from the BBC morning show, as she likened the experience to jumping into cold waters.

In view of her 216,200 followers, the star, who co-hosts alongside Dan Walker, posted a snap of herself taking the plunge in a dark lake.

She wrote: “This is what it feels like to be leaving #BBCBreakfast after so long.

“Scary but exciting like this clear water… officially my last day is the 15th September, thanks so much for your kind and supportive messages.”

In the picture, the BBC host floated in murky waters as she reached her hands towards the surface and blew bubbles out of her mouth.

In June, Louise confirmed that she would be stepping down from the show at the end of the summer.

One wrote: “You are by far the most enjoyable watch! Compassionate, and genuinely friendly on the sofa.”

Another added: “Louise, going to miss you, but you deserve a rest, wishing you all the best, but hope we see you soon somewhere back on the telly .”

As a third commented: “You will be missed so much, my early mornings will never be the same. Brightening my day before work.”

Yesterday, Louise confirmed her leaving date to Dan, before adding that her exit was “100 per cent the right thing” for her to do.

She told her co-star: “No, I’m not going today, I am going to be leaving this programme on the 15th September, it’s two weeks from today.”

Looking serious, Dan replied: “But this is quite big though, Louise. Because how long have you done Breakfast for again?”

“Well, it would have been 20 years in December this year,” she replied.

Dan continued: “Have there been any points since you said you were going to leave that you’ve thought, ‘Oh, have I made the wrong choice? I might just stay’? Please!”

Laughing, the broadcaster explained: “I promise you, if I told that to our boss, he’d be like ‘What?’

Earlier in the year, Louise addressed her exit to viewers, saying: “It will be, this year, 20 years since I first presented this programme.

“Since then I’ve felt part of a huge, enormous BBC Breakfast family which includes everyone who works here, everyone on the team and every one of you who watches the programme.

“I’ve loved being part of it but – there is a but – I’ve decided that is time that I stop setting my alarm for 3:40am.

“It’s not going to be for a while. But before anything else I wanted to thank everyone that is watching for your loyalty and your support over all those years,” she added.