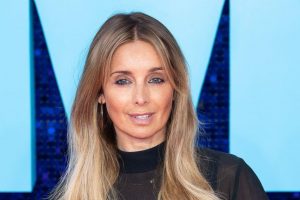 Louise Redknapp has replied to concerns over a particular chew toy she gave her new pet French Bulldog Banksy Blu.

After the former pop star first introduced her pooch to followers, she then shared an adorable video of the silky-furred canine "having a chew" on what appeared to be a simple dog toy.

But the 47 year old mum-of-two, who shares sons Charles, 17, and Beau, 13, with her ex-husband Jamie Redknapp, received an influx of worried comments and messages from others who had learned the hard way the rawhide chew toy was dangerous for the breed.

One fan warned: "Be super careful with rawhide babe especially with bull breeds, they can be so dangerous, I learnt that the hard way with my Frenchie. "We had a scary choking experience with him, I had no idea that rawhide was not a good thing to give dogs, done some research after and have never given him one again! Xxxx"

While another follower wrote: "Gorgeous but I wouldn’t recommend rawhide it is so bad as the stomach can not digest once swallowed."

"Beautiful pup.. but rawhide is a big no, can cause serious stomach and intestinal problems in dogs, he’s a handsome little fella, too cute.x," another person added.

In response to the alarming advice, Louise revealed she has taken everything on board to protect her new pup, and hadn't known the risks. The star began: "Hi guys thanks for all the advice on rawhide.

"We took it off him pretty quick before it got soft and could get caught in his throat. Louise and her sons decided to adopt Banksy Blue earlier this month after the whole family were "devastated" at the loss of their beloved dog Blubelle a few weeks earlier.

"We were so devastated losing our girl Blubelle a few weeks ago, and we really noticed a change in Rudi’s behaviour so we decided a little brother might be what he needs…" the TV personality announced with an adorable video.

"Say hello to Banksy Blu… he’s definitely settled in @colourbulls_uk what a beaut he is!" she gushed.

For all the latest celebrity news, sign up to our daily newsletter here .