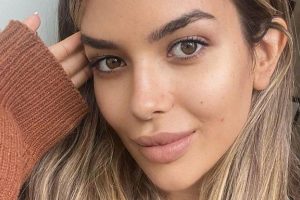 The 27 year old actress, who divides her time between London and Istanbul, has already caused a stir since her entrance on Wednesday (8 June).

And in photos exclusively obtained by MailOnline, a 17 year old Ekin-Su is pictured in a white bikini and sash while competing in a Miss Ireland beauty pageant in 2012, looking very different following surgery.

Eight months before her appearance on the show, Ekin-Su got a boob job and her teeth done.

She previously revealed on Instagram that she had visited Dental Design in Antalya, Turkey, and paid £4,000 for veneers.

In a Q&A about the work she had done, she explained she had 10 teeth done at the top and 11 on the bottom.

She also answered questions about a breast lift she had done in Istanbul, and was treated to a luxury stay at a villa and round the clock care while undergoing the procedure.

Before her acting career, Ekin-Su studied at the University of Central Lancashire, where she studied performing arts and was known as Susie Hayzel.

A source told MailOnline: “Ekin-Su was definitely a character.

“Everybody knew who she was at university, and she made sure of that. We only ever knew her as Susie though, and it was a surprise when she started going by the name Ekin-Su.

“She had a strong Essex accent at university, which has changed a lot since she pursued her acting dreams in Turkey.

“Ekin-Su always wanted to be famous, she studied performing arts and after uni competed in Miss World, Miss Ireland, and Miss Central London beauty pageants, so being on Love Island suits her.”

Ekin-Su made her debut on the ITV2 reality show alongside fellow bombshell, Afia Tonkmor, 25.

Since her arrival on the show, Ekin-Su has already caused drama.

She immediately took a shine to Italian hunk Davide Sanclimenti, 27, and criticised his relationship with Gemma Owen, 19.

Speaking in the Beach Hut, she claimed: “It’s a very dry couple. Where are the amore kisses? Where’s the ‘good morning baby’?”

She wrote: “I have one word for Ekin-Su – and that’s iconic. I’m obsessed with her.

“As a viewer, you need someone to bring the drama and keep everyone on their toes. She’s an actress, so she definitely knows what she’s doing.”

She added: “She actually reminds me a little bit of Maura Higgins. When Maura first entered the villa, a lot of people were unsure about her, but she quickly became the favourite.

“I definitely think she could be the new Maura this year.”

For all your updates on Amy Hart and Love Island, sign up to our Factor 50 newsletter.