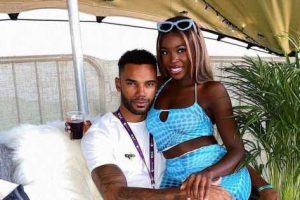 Kaz Kamwi has revealed that her boyfriend Tyler Cruickshank has told her that he loves her since leaving the Love Island villa.

The 26 year old met Tyler, also 26, on the ITV2 dating show this summer, with their romance ending her string of cursed couplings.

Shortly after returning home, the pair made their relationship official and became boyfriend and girlfriend, with Kaz now spilling how Tyler has dropped the "L" bomb.

Playing a game of Mr & Mrs for Spotify podcast Who We Be TALKS, host Jack Fowler asked: "Who said I love you first?," with Kaz teasing Tyler as she responded: "Well…"

The pair also opened up on Tyler fancying Kaz before she did him – but only because he had seen her on TV.

"Because I would have seen you first," he told Kaz before they decided on their vote.

It comes after the couple admitted they had already started thinking about baby names, with Kaz revealing she wants two children.

Speaking on Capital Xtra earlier this month, Tyler said: "Listen. Well, I said this in the show. I wanted my next relationship to be my last one. You know, I mean, I'm serious about relationships. As is Kaz.

"But again, we just we just play things by ear, you know, we are on the same page and we're kind of taking things at our own pace."

But blogger Kaz, 26, got straight to it as she declared: "Yeah. Two babies."

Kaz added that she wanted a boy and a girl, but insisted it wouldn’t be for a "couple of years".

Tyler then prompted his girlfriend to go even further as he brought up that they'd discussed potential names for their future offspring too, saying: "Remember the names. Don't say them, but you remember the names?"

"No I can't. I remember but I can't say them. Can't say them,” Kaz giggled, and they both confirmed that names "have been discussed".

For the latest updates on Kaz and Tyler and the rest of the Love Island cast, sign up to OK!'s daily newsletter.