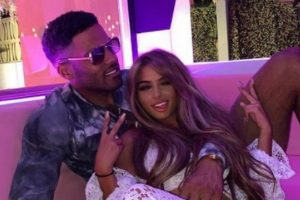 The pair first went public with their relationship in July 2020.

Soon after, they after announced they were expecting a baby, with Chloe joking that she thought they had “escaped the lockdown baby boom”.

However, it is thought they've been unable to make their relationship work.

Chloe has reportedly accused Luis, 27, of “not making an effort” with their son Romeo, saying that he’s “always out partying”.

A source close to the couple told The Sun: “Luis and Chloe went through a very difficult time with their son and despite everything, they have just failed to make it work.

“They decided to split after a string of rows, and the long distance between Manchester and Newcastle wasn’t helping.

“They’ve unfollowed each other on socials and Chloe has accused him of not making an effort with the newborn baby as he’s always out partying.”

OK! has contacted the couple’s representatives, with Luis' declining to comment.

The couple’s son was born 11 weeks prematurely and had to stay in hospital for nine weeks following his birth.

Shortly after his birth in October, Chloe issued an update to fans and called him an “absolute trooper”.

Taking to Instagram, she wrote: “As you can imagine the past couple of weeks have been truly been the best but most difficult weeks I’ve ever had to face, it’s so hard to speak to a dr and then not able to tell you that your son is gonna be ok.

“However, Romeo is absolutely thriving at not even 2 weeks, old, he’s had a couple a set backs but he is an absolute trooper and we honestly couldn’t be more proud of him.”

She added: “He’s deffo on the right tracks and he will be home in no time, just need to fatten him up first.”

Thankfully, the couple were able to take Romeo out of hospital in December and take him home in time for Christmas.

Chloe shared a photo of herself carrying her son in a baby carrier as they left hospital, with an oxygen tank strapped to her back to help with his breathing.

“We did it Romeo, you did it. Nearly 9 whole weeks I have watched you fight every single day, it has been the hardest thing I’ve ever had to face, but you NEVER give up and I am SO PROUD of you.

“There is no words to explain how much of a rollercoaster the NICU has been been but if do it all again if it meant I got you as the end result. Romeo you truly are my little superman, I am the luckiest girl alive to be ur mammy.”

Luis, who is a professional football player for Macclesfield F.C., also has a daughter, Vienna, with fellow Love Islander Cally Jane Beach.

They had previously met on the reality show in 2015, but just 10 weeks after their daughter’s birth, they split up.

They got back together before shortly splitting again, this time for good.

For the latest showbiz reports and breaking news, sign up to OK!'s daily newsletter here.