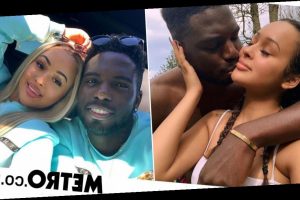 Love Island 2017 star Marcel Somerville has shared the exciting news he’s going to be a father, as he revealed his girlfriend Rebecca Vieira is pregnant.

The 34-year-old singer and reality star – who is a member of Blazin’ Squad – has been dating Rebecca for 14 months, with the pair saying they were trying to fall pregnant for months.

However, as Marcel revealed, the pair were dealt a devastating blow when 24-year-old Rebecca suffered a miscarriage last year.

‘We don’t really like to talk about it,’ he told OK! Magazine this week. ‘We found out we were pregnant very early in our relationship, and both felt like we wanted to spend the rest of our lives together, so we were getting ready for the baby. And then we found out we had a miscarriage. We both took it really badly. It took a little while for us to get over it, but it did make us stronger because when you go through something like that, it makes you be there for the other person.’

The couple have known about their impending arrival for seven weeks, with Rebecca surprising Marcel while in the studio with ‘a bunch of pregnancy tests’.

Their recent happy news was marred by a hospital dash for Marcel three weeks ago after he suffered from Diabetic Ketoacidosis [DKA], which ‘basically means the ketone [a chemical the liver produces when it breaks down fat] levels in my body rose too high and turned my blood acidic’.

Happy Anniversary @rebeccavieirax my sweetness! Mad spending our anniversary on lockdown but there’s no one in the world I’d rather be spending 24/7 with mama. Love you so much! We’ve had a mad year, if they only knew! But we’re here about to start the next 365 Let’s Go, I’m so ready ♥️♥️♥️ 🤱🏽💍🤷🏿👀♥️♥️♥️

He explained: ‘I was throwing up, felt light-headed. I lost weight, my face was sunken and you could see my bones. It was because I have Type 1 diabetes, but I only found that out in hospital when they asked, “Do you know you’re diabetic?” I had no clue.’

Saying he’d lost weight in the lead-up to his turn, Marcel was in intensive care for over a week, adding he ‘was very close to being in a coma’.

Now recovered, Marcel is looking towards the future as he dished on his plans to wed Rebecca.

When asked whether the pair will be heading down the aisle, the singer said: ‘A million per cent. I don’t want to give too much away, I’ve got certain plans. I know this is the woman I’m going to spend the rest of my life with. There will definitely be wedding bells…’

Marcel came fourth in the 2017 series of ITV2’s Love Island alongside then-girlfriend Gabby Allen. The pair split in April 2018.