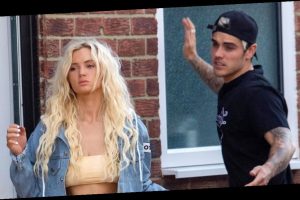 The couple confirmed their relationship status early this week and things certainly look like they're hotting up between the pair.

Lucie was effortlessly stylish in a lemon coloured sports bra which she teamed with matching coloured bottoms.

Luke looked equally as laid back wearing a black T-shirt and skinny jeans.

Lucie has been staying at Luke's home since going public.

The love-struck pair were kept apart throughout the coronavirus lockdown but are now taking full advantage of the easing of restrictions.

They've since been enjoying dates and each other's company.

They went to see The Joker at Daisy Duke's Drive-In and were spotted kissing – they couldn't keep their hands off each other.

Lucie shared a sweet pic of them as the sun started to go down down. She captioned it: "Sunset drive in cinema" with a heart eyed emoji.

And they went on a surfing trip at Saltburn beach in North Yorkshire on Saturday.

Luke posted a picture on his Instagram of him and Lucie both wearing wetsuits and enjoying a drink.

He captioned the picture: 'My partner in crime.'

As they shared the photographs, which declared they are an item on their social media feeds, the couple enjoyed some seaside fun as they ate fish and chips by the sea and visited an arcade, where Luke played a basketball game.

But, their romance hasn’t appeared to thrill everyone as Luke’s ex Demi Jones, 21, appeared to take a swipe at the pair in a cryptic tweet.

And a fan instantly picked up on the shady dig as they asked: “this is about Bieber and the mermaid with the dry hair, isn’t it?” [sic]

But, Demi appeared to backtrack on her comments, insisting it wasn’t about the new Love Island couple as she said: “No it really isn’t actually just felt like tweeting it because us gals need to be reminded sometimes lol, twitter reads into things too deep x”.