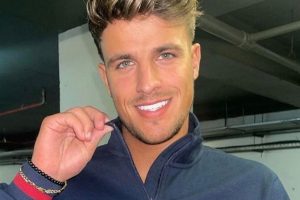 Luca Bish teased fans to guess who he was with as he enjoyed a “date night” on Thursday.

The Love Island star’s evening out comes after splitting with Gemma Owen, after three months of dating following their time on the ITV2 series this summer.

Luca, 23, uploaded a brief clip on Instagram Stories of him entering a restaurant hallway, decorated with flowers and fairy lights, as he asked followers to work out who he was meeting up with.

The reality star gave the options of Andrew Le Page, Jacques O’Neil, Dami Hope, and management, for fans to choose from.

Gemma’s ex-boyfriend Jacques, who Luca became close friends with on the show, was the most popular vote among the fishmonger’s 1.5 million followers.

Gemma, 19, and Luca became a seemingly solid couple early on in the last series of Love Island, and came in at second place to winners Ekin-Su Cülcüloğlu and Davide Sanclimenti.

After going official following the show, it wasn’t long before the pair ran into problems and eventually split, announcing it last month.

Gemma said the break-up wasn’t an “easy decision” as she addressed fans on Instagram in a statement.

She wrote at the time: “To all my followers, I wanted to let you know that Luca and I are no longer in a relationship. It wasn't an easy decision but ultimately this is what is best for us both right now.

"Many of you have been on this journey with us from the beginning, and I wanted to thank you for your continued support as we start our new chapters."

A week later, Luca returned to Instagram as he informed followers he had needed to “clear [his] head” following the split announcement, and had switched his phone off to avoid “messages and news articles about my breakup."

The star went on to say he would like "some time" to process the decision "privately" and thanked those who had supported him.

It was revealed to OK! last month that Luca and Gemma’s split came after a make-or-break trip for the couple in Dubai, after a rocky few weeks between them.

A source told us: “It was Gemma who ended things. Things had been rocky for weeks and the split didn’t come as a shock.

"It had been going on for weeks and they had brushed over things and then they went to Dubai and nothing really changed so things came to an end."