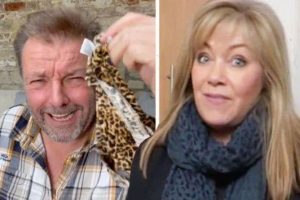 Lucy Alexander, 51, was among those waiting to hear what her old TV co-host Martin Roberts, 58, had up his sleeve, after teasing a new on-screen project for the past few weeks. And as he finally revealed what he was taking part in, she was both excited and a little “scared”.

Omg I’m scared! But I know you’ll kill it

It comes after the Homes Under The Hammer host announced he’s going to appear on Strictly: The Real Full Monty later this year.

The BBC star will take his kit off alongside a host of other celebrities to raise awareness of cancer.

The striptease will be held in in Blackpool in front of thousands of spectators and the risque routine, created by Diversity’s Ashley Banjo, will be shown on ITV at Christmas.

In response to his video, Lucy was among the first to reply.

“So for years we’ve talked about damp patches, cracks & semi’s…” she cheekily wrote on Twitter about their time on the property show.

“Now he’s finally got the chance to shine.

“@TVMartinRoberts my old TV husband I cannot wait to see you in #thefullmonty all for a worthy cause & fab charity, leopard thong?”

Martin has been teasing his fans about the project for months, and finally unveiled the details behind the charity striptease in his latest social media video.

Sharing to Twitter and Instagram on Monday, Martin penned: “The time has come, I apologise for the months of teasing, but I can finally reveal that I am taking part in The Real Full Monty.

“Yes, I am getting my kit off for cancer!”

He continued: “It is all for an amazing cause, to bring more awareness to particularly guys’ cancers such as prostate cancer, bowel cancer, testicular cancer.

“And for girls breast cancer and cervical cancer.

“If by doing this, we get more people to go to the doctor earlier at the first signs of any problems, then this is probably the most important show that I have ever done because it can actually save lives.”

Martin went on to reveal that he wanted to take part in order to honour his best friend Dave, who sadly died of bowel cancer four and a half years ago at the same age.

“The reality is, that in just over a week I’ll be going to Blackpool and taking my kit off in front of 3,000 people and I’m not particularly body confident,” he giggled.

“So this is a massive thing for me, but we’ve got an amazing group of people who are all doing it together and yeah… just wish me luck!”

He concluded his video urging people to go to the doctor if they notice any worrying symptoms or signs before holding up a leopard print thong, which could be – and Lucy certainly believes is – a potential sneak peek of what’s in store for the ITV special.