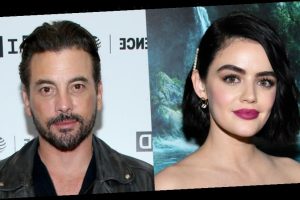 The 31-year-old Katy Keene actress and the 51-year-old Riverdale actor were seen kissing while out to lunch at Sweet Butter Cafe on Sunday (February 21) in Los Angeles.

In photos obtained by Page Six, Lucy and Skeet could be seen cuddling up, holding hands, and of course, going in for a kiss.

Lucy and Skeet of course have the Riverdale connection, though they never filmed together. Lucy made a guest appearance on the series when Veronica (Camila Mendes) went to visit Katy Keene.

Skeet recently ended his run on Riverdale. He wrapped filming last October, and his final episode was the recent graduation episode before the seven year time jump.