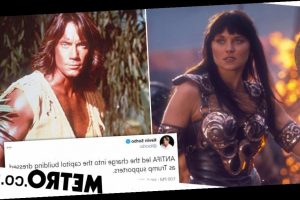 Xena star Lucy Lawless has gained all the praise hand emoji after she called out Hercules actor Kevin Sorbo, who shared a conspiracy theory suggesting it was ‘leftist agitators’ who stormed the Capitol this week amid the Trump riots.

Sorbo, who is an ardent Donald Trump supporter, and believes in the incumbent president’s claims that the election has been hit by fraud, was sharing quite the number of tweets on Wednesday night, as protestors staged a protest in Washington DC in an attempt to interrupt the formal approval of Joe Biden’s election win.

The actor, who starred as the titular character in the series Hercules: The Legendary Journey, from 1995 to 1999, shared a widely-circulated image of three rioters storming the Capitol, including the so-called QAnon Shaman (which many thought bore a likeness to Jamiroquai’s Jay Kay).

Someone had suggested they were not right-wing, but instead ‘Leftist agitators disguised as Trump supporters…’, with Twitter labelling the image as ‘manipulated media’.

While there has been no evidence that Antifa was involved in the protests, according to fact-checkers, Sorbo wrote alongside the tweet: ‘They don’t look like Patriots to me…’

His response was picked up by Lawless – the actress who played the iconic Xena Warrior Princess, in the Hercules spin-off in the 90s and early 00s – who had a response for Sorbo primed and ready to go.

In response, Teigen tweeted: ‘Because we know how stupid it f***in looks lmao’, while Alyssa Milano replied: ‘Our flag flying is our vote. And our compassionate candidate encouraged people to protect themselves from the pandemic that has taken 250k American lives. This is not hard.’