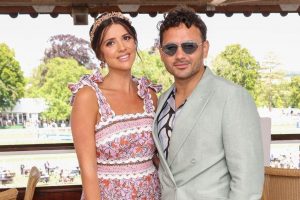 Lucy Mecklenburgh has joked she could be ready for more kids with fiancé Ryan Thomas just weeks after the birth of their daughter.

The former The Only Way is Essex star only gave birth to their second child, baby girl Lilah, in May this year.

However, she has already been speaking about growing their brood in an Instagram Q&A where a fan asked if she was “done” having children.

Sharing her reply to her 1.7 million followers, Lucy, 30, admitted she is “very likely” to be finished having children and that she “feels very blessed to have a healthy boy and a girl”.

However, she also teased: “But Lilah is so happy and sleeps so well, she’s selling it more and more to me so u never know.”

She further added to the joke, ending her reply with a direct mention of Ryan’s Instagram handle followed by three emojis of a man running away.

When asked about how Lilah sleeps so well, she added: "I have no idea! With Roman it took months and nap routines etc.

"I think it proves all babies are soo different. She has several naps throughout the day. Usually a two hour one in the morning after about one to two hours awake then little cat naps all day."

It took the couple three weeks to settle on a name for their new arrival. Lucy revealed her name, Lilah Rae Thomas, on Father’s Day.

She shared a sweet snap of her newborn, writing: “Yay!! I finally have a name!!! Lilah Rae Thomas.”

The big reveal came after the couple had previously shared they were finding it “really difficult” to decide on a name, with Lucy teasing fans the day before that they’d finally chosen the perfect one for their little girl.

And big brother Roman seems to be loving having a baby sister.

Sharing a sweet clip to Instagram Stories, Roman could be seen leaning over his little sister.

“We had our first outing yesterday, Roman was just kissing her constantly! My heart!” she wrote.

In the same Q&A, Lucy revealed that she ordered a Deliveroo pizza to hospital following Lilah's birth.

One fan asked: "Did you give birth NHS or private? I want pizza after giving birth too!"

To which Lucy responded, saying: "NHS – we ordered a Deliveroo lol."

When replying, she added a photo of herself breastfeeding Lilah, all the while tucking into a slice of pizza in her hospital bed.