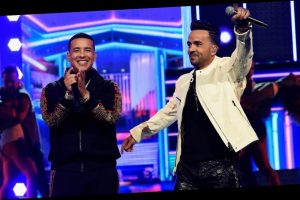 More than three years after it was initially released, “Despacito” continues to earn accolades. The Billboard Latin Music Awards honored Luis Fonsi and Daddy Yankee with the Billboard Latin Song of the Decade award for their worldwide hit on Wednesday.

Fonsi took the mic first, sharing in Spanish, “I want to thank God for putting his hand on this song.” “He surrounded me with good people with big hearts. I want to thank Daddy Yankee because without your voice and your energy we wouldn’t be here,”  he added. “Thank you, Justin Bieber, for being part of the remix. The big takeaway is that the whole world sang in Spanish.”

Daddy Yankee kept it short, shouting out family and Fonsi before accepting the award.

The reggaeton song topped Billboard’s Hot Latin Songs chart for a record 56 (non-consecutive) weeks, the most weeks at No. 1 for any title since the chart’s inception in 1986. Just as impressively, the hit later went on to make history at the top of the Billboard Hot 100 chart tying the then all-time mark for weeks at No. 1 after spending 16 weeks atop the list, proving it was a bonafide crossover hit.

“I’m afraid I still have not figured it out how or why ‘Despacito’ achieved what it did,” Fonsi shared with ET back in 2017. “My goal was to write an amazing song with a brand-new sound for my Latin audience, a song that would make them feel good, to dance, to escape from any harsh reality and just be free, not even thinking about a crossover record.”

For more on Fonsi, watch the video below.

END_OF_DOCUMENT_TOKEN_TO_BE_REPLACED

END_OF_DOCUMENT_TOKEN_TO_BE_REPLACED
We and our partners use cookies on this site to improve our service, perform analytics, personalize advertising, measure advertising performance, and remember website preferences.Ok