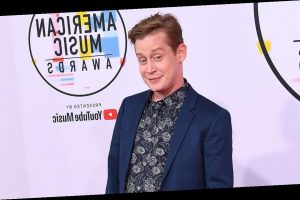 Keep safe, ya filthy animals! It may be October, but Macaulay Culkin is putting fans in the holiday spirit in the best way possible. The 40-year-old Home Alone star took to Twitter on Wednesday to share a photo in his hilarious new face mask.

“Just staying COVID-safe wearing by the flayed skin of my younger self,” he captioned the funny pic. “Don’t forget to wear your masks, kids.”

In the pic, a wide-eyed Culkin poses wearing a mask with a print of his childhood self screaming and slapping his face from the iconic 1990 holiday classic.

The actor is also standing in front of what appears to be a Lego-crafted version of the Empire State Building, seemingly in reference to the movie’s iconic 1992 sequel, Home Alone 2: Lost in New York.

Just staying Covid-safe wearing by the flayed skin of my younger self.

At the 2019 Golden Globes, Macaulay’s younger brother, Kieran Culkin, who also appeared in Home Alone, shared with ET that their family actually watches the film around the holidays like the rest of us.

“You would think that because he was in it, because it was such a big thing, that we wouldn’t be able to enjoy it like a Christmas movie. But over the years we have been able to,” he told ET. “Yeah, we watch it! I haven’t watched it in the last couple Christmases, sort of like A Christmas Story, I used to watch it every year and it’s like I need a break every couple years before I can watch this one again.”

END_OF_DOCUMENT_TOKEN_TO_BE_REPLACED

END_OF_DOCUMENT_TOKEN_TO_BE_REPLACED
We and our partners use cookies on this site to improve our service, perform analytics, personalize advertising, measure advertising performance, and remember website preferences.Ok