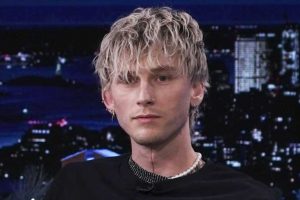 Love hurts quite literally when you're Machine Gun Kelly.

During an appearance on The Tonight Show with Jimmy Fallon, the rapper (whose real name is Colson Baker) shared a story about accidentally stabbing himself in order to impress his girlfriend Megan Fox in the early days of their now-very established relationship. Naturally, knifeplay and a cameo from Travis Barker are involved — and all the while, MGK was wearing a throwback Jennifer's Body shirt while he spoke to Fallon. Subtlety doesn't seem to exist in a world that involves blood necklaces and an "I am weed" meet-cute. "Travis got me this knife that had an engravement from the new album on it and I was like, 'Check this out, this is sick,' and I threw it up and it came and stuck in my hand," Kelly explained. He didn't let Fox see him freak out, however, telling Fallon that he played it cool until the next day as he showed off his scar: "The next morning as soon as she left, I was like, 'Yo, I need stitches real quick."

In addition to the bloody wound, Kelly said the night also included a bruised tailbone, which came courtesy of a game of beer pong with another famous pal, Post Malone.

"It was a bad night," Kelly finished, though after all that pain and suffering, things between him and Fox seem to have worked out just fine. If anyone can figure out how to turn pain into art — and cringy stories — it's MGK.