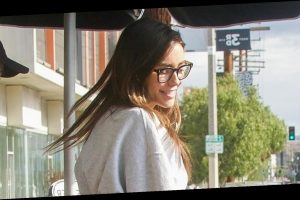 Madison Beer picks up her car at the valet after lunch on Thursday afternoon (January 9) in West Hollywood, Calif.

The 20-year-old singer paired her gray cropped sweater with a pair of black leggings and white socks and sneakers.

PHOTOS: Check out the latest pics of Madison Beer

The week before, Madison was seen dining out with her ex-boyfriend Jack Gilinsky. They were seen chatting and having a good time with friends at Toast Cafe, before leaving together.

The former couple, who split in 2017 after two years of dating, have been spending quite a bit of time together recently, as they were also seen in Aspen around Christmas.