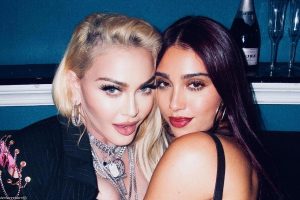 Weighing in on the matter, the ‘Material Girls’ hitmaker takes to her social media platform to share that she’s ‘scared for all women in America’ following the Supreme Court’s decision.

AceShowbiz –Madonna has reacted to the Supreme Court’s decision to overturn Roe v. Wade ruling. Taking to her social media page, the “Material Girl” hitmaker said that she’s “scared for [her] daughters.”

The 63-year-old singer, who has Lourdes Leon, 25, Rocco, 21, David and Mercy, both 16, and nine-year-old twins Stella and Estere, has been “plunged into deep despair” by the Supreme Court’s decision, which will allow several U.S. states to move forward with legislation to ban or restrict abortion, and called on women to “fight” against the move.

She wrote on Instagram, “I want to say that I had a great time at the party after my Show for Pride at terminal 5, but I woke up to the terrifying news that Roe V Wade had been overturned and that. Legislation has decided that we no longer have rights as women over our bodies. This decision has plunged me and every other woman in this country into deep despair.”

“Now the Supreme Court has decided that Women’s rights are no longer constitutional rights. In fact we have less rights than a gun. I am scared For my daughters. I’m scared for all women in America,” Madonna continued, before stressing, “I am just plain scared.”

“I Guess God put this on our shoulders right now because he knew that we were strong enough to bear the weight,” Madonna added. “Strong enough to FIGHT! Strong enough to overcome and so we Shall Overcome! We will find a way to make It A Federal Law to Protect Abortion Rights! Ladies are you ready…….. To Fight?(sic)”

The 1973 Roe v Wade battle centered around “Jane Roe”, a pseudonym for Norma McCorvey. She was a single mother pregnant for the third time who wanted an abortion, and sued the Dallas attorney general Henry Wade over a Texas law that made it a crime to terminate a pregnancy except in cases of rape or incest, or when the mother’s life was in danger, arguing the law infringed on her constitutional rights.

President of the United States Joe Biden has blasted the ruling as “un-American” in an address from the White House, adding it was a “sad day for the court and the country” and calling the move “wrong, extreme and out of touch.”