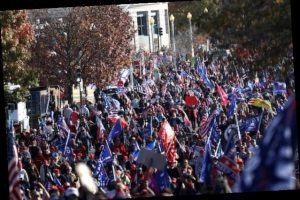 “This is why Trumpland doesn’t believe the election results: They don’t believe in counting,” Mrs. Betty Bowers tweeted 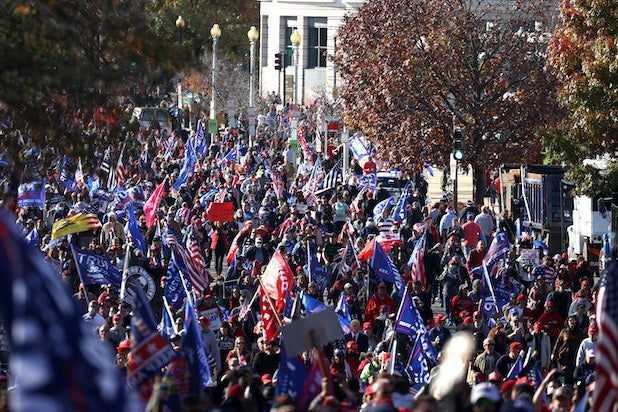 White House press secretary Kayleigh McEnany’s Saturday tweet with accompanying photo of the Washington D.C. gathering of a “million” Donald Trump supporters was met with jeers by many on social media who doubted her claim of turnout size.

“AMAZING! More than one MILLION marchers for President @realDonaldTrump descend on the swamp in support. Best base in political history — we LOVE you guys!!!,” she tweeted from her personal account.

Skeptics and critics who questioned her math skills immediately began to weigh in.

“To be clear: THIS is what a MILLION MARCH looks like. The WOMEN’S MARCH January 2017. @PressSec Not a paltry group of 2k.#SorryToBurstYourBubbleBut,” Linda DeKover tweeted.

Patricia Arquette added, “Then I guess 100 million were at the women’s march.”

Mostly maskless Trump supporters kicked off the demonstration near Freedom Plaza east of the White House and marched towards the Supreme Court, calling the event the #MillionMAGAMarch. Mainstream Trump supporters, as well as the far-right Proud Boys and the Oath Keepers militia group were among those marching who falsely claim Trump won his second term.

Arquette and DeKoven there were not alone with their assessment of the crowd size.

“Lol, not only is that not 1 million people, I’ll wager there aren’t even one million teeth in that ‘crowd,’” another Twitter user wrote.

“This is why Trumpland doesn’t believe the election results: They don’t believe in counting,” Mrs. Betty Bowers tweeted.

Here are a few others with opinions of their own: